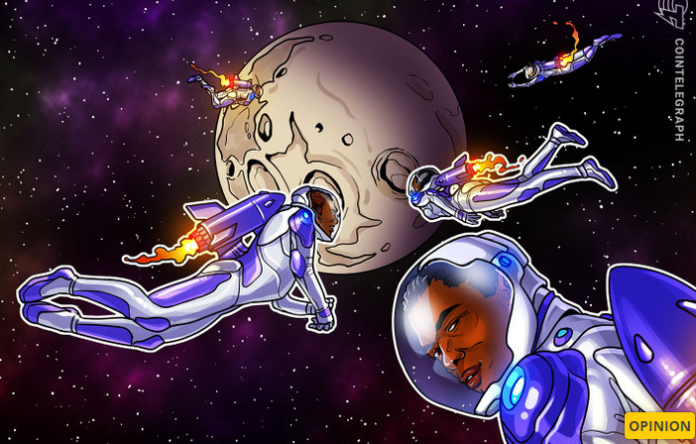 The situation has changed drastically in recent times. Real-life examples of early investors turned influencers acquiring property through crypto proved to be excellent advertisements. Furthermore, the degens who had been given a bad name for so long were tireless in their efforts to share the good news about cryptocurrencies. Those few who dared to enter the space despite poor PR placed a heavy emphasis on education, which has resulted in crypto becoming a household name. In addition, economic conditions in recent years have made the case for a decentralized, permissionless digital economy stronger than ever.

Within the new class of cryptocurrency adopters there is a set of people who really stand out: celebrities. They are everywhere: on our screens, on billboards, and now in our crypto world. These famous athletes, musicians, and actors are joining the space in many ways, but for the sake of this article, I’ll group them into three groups: promoters, experimenters, and the curious.

Related: This is what’s happening at Web3 in Africa

Promoters
As already established, the negative public relations that crypto has faced in Africa means that a lot of rebranding and promotion is needed. The huge interest in cryptocurrencies on the continent has attracted large consumers, such as Binance and FTX, who have large marketing budgets. Local companies like Quidax and Yellow Card, which want to keep pace with these international companies, have also adopted similar spending habits. An important feature of the marketing plans of the three companies mentioned is the inclusion of celebrities.

Binance is spending heavily in Africa. In early 2022 alone, Binance sponsored the African Cup of Nations in Cameroon and Nigerian Idol. Including popular faces in your educational campaign is a critical part of your marketing efforts. In December 2021, the exchange signed deals with Big Brother Naija reality show contestants Hazel Oyeze Onou, popularly known as Whitemoney; Ikechukwu Domingo Okonkwo, known as Cruz; and Pere Egbi, known simply as Pere. Since the announcement, the trio have appeared in several educational videos aimed at potential new cryptocurrency users.

Nigeria-based Quidax is not slowing down as it intends to compete with various international exchanges entering the market. In March 2022, the exchange announced popular Nigerian music producer Don Jazzy as its brand ambassador along with five other celebrities: Diane Russet and Bisola Aiyeola, both actors and reality TV stars, actor Timini Egbuson, celebrity chef Gbubemi Fregene and musician M.I Abaga.

Yellow Card is another Nigeria-based exchange looking to capture market share on the continent. The exchange announced a partnership with Ghanaian dancehall artist Stonebwoy to spread crypto awareness in West Africa.

experimenters
Another group of celebrities who have entered the space are the experimenters. These big names have set the stage for blockchain technology to be used to amplify creativity and harness new ways to connect with fandoms through non-fungible tokens (NFTs), Metaverse, and fan tokens.

In Nigeria, Bnxn and Falz are two of the biggest artists to have released an NFT. Bnxn (previously known as Buju) released HeadsByBnxn, a collection of 10,001 NFTs designed around him and his journey in the music industry. The project launched on the Polygon blockchain to make minting more affordable. Holders receive exclusive listening parties and in-person and virtual shows.

Falz, another popular artist, struck a deal with the Binance NFT Marketplace, where he exclusively sells his Falz Ice Cream collection. Like the Bnxn collection, there are exclusive experiences for people who have the NFTs. I had a chance to speak with Falz about his collection on Cointelegraph’s flagship Twitter Spaces show, Crypto Ta