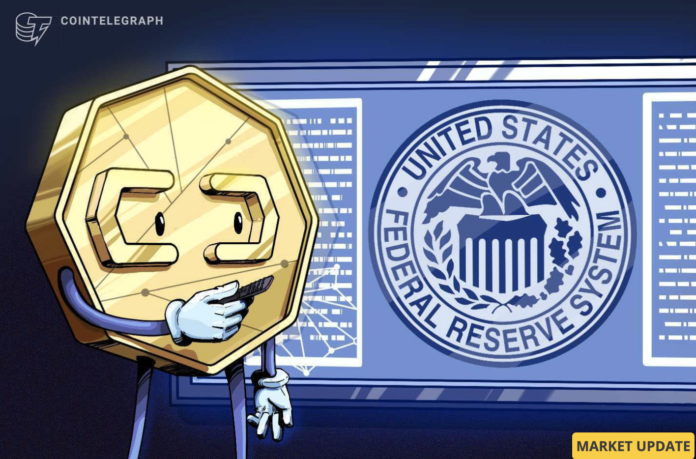 Bitcoin saw immediate volatility on November 2 as the US Federal Reserve raised its interest rate for the fourth consecutive time by 0.75%.

The Fed confirmed its 0.75% rise, which represents the most intense hiking schedule in forty years, in a statement shared on behalf of the Federal Open Market Committee.

The committee seeks to maximize employment and inflation at a rate of 2% over the long term. In support of these goals, the committee decided to raise the target range for the federal funds rate to 3-3/4 to 4%, the Fed said, adding:

“The Committee expects that continued increases in the target range will be appropriate in order to reach a monetary policy stance that is sufficiently restrictive to bring inflation back to 2 percent over time.”
Analysts have long expected increased volatility from the interest rate decision. At the time of writing, Fed Chair Jerome Powell was still providing comments on the move, something that markets are looking to desperately for signals of the path.

However, the Fed’s decision was widely expected, according to CME Group’s FedWatch tool, with Cointelegraph reporting a theory that sticking to the script would still provide cryptocurrencies with an opportunity to the upside.

Federal target rate odds chart. Source: CME Group
How long can these rises continue?
If Powell hints at possible slower increases or a pivot in policy, the situation could shift dramatically.

“The market is up ~13% from its lows. That was an expected 75 basis points. It’s all about stress now,” summed up a popular CryptoISO market analysis account, adding:

“We knew the Fed had telegraphed an eventual slowdown/pause. Not a pivot but a more reassessment as the data comes out to see how it’s flowing. It’s not going to work 75 basis points every time.”