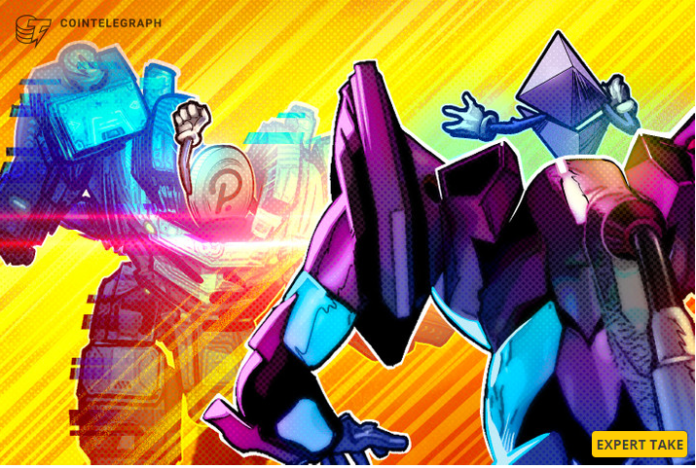 Thus, the Polkadot ecosystem and the Substrate platform can be compared to the upcoming Ethereum upgrade as the race towards Web3 gains momentum.

For most casual digital asset investors, the Ethereum 2.0 update promises to be a game-changing event that will increase efficiency, reduce network costs, and bring the entire blockchain and crypto space closer to Web3 reality.

Ethereum has struggled with a lack of scalability and skyrocketing gas fees, and as it serves as the largest platform for developing smart contracts and DApps, moving to a more reliable and scalable Proof-of-Stake (PoS) blockchain will be a welcome respite.

What most casual investors don’t know, however, is that the Polkadot Substrate platform has made huge strides in developing a parallel decentralized internet infrastructure that many believe will eventually eclipse Ethereum.

Since the release of the Polkadot white paper, its value as a bridge between the Ethereum ecosystem and many of the capabilities that make up Web3’s web experience has been at the forefront of Polkadot’s key strengths.

So how exactly does Polkadot compare to Ethereum? What is the current progress of Ethereum towards a decentralized Internet and have Polkadot parachains become a real threat to the dominant network of smart contracts? Here is a brief overview of the technical details that separate the Polkadot ecosystem from the upcoming Ethereum upgrade.

Two Paths to the Decentralized Internet
To understand the value that Polkadot offers, we must first compare the Polkadot substrate and how it differs from what Ethereum currently offers.

There is no denying that Ethereum was once considered a revolutionary technology and a desirable platform for DApp development. However, over the years, scalability has become Ethereum’s Achilles’ heel. At approximately 1 million transactions per day, the Ethereum blockchain is only capable of processing 15 transactions per second (TPS), resulting in volatile gas fees. While this number will increase with the upgrade to Ethereum 2.0, it will still be far behind traditional centralized infrastructures like Visa, which can theoretically handle over 1700 TPS.

In addition to a slow and congested network, the legacy Ethereum consensus algorithms consume up to 112.15 TWh per year, which is comparable to the power consumption of Portugal or the Netherlands. Simply put, Ethereum relies heavily on the Proof-of-Work (PoW) algorithm, which requires heavy mining to add new blocks to the chain and confirm transactions.

See also: In the Mind of a Blockchain Developer: Proof-of-Work Blockchain Consensus

Ethereum 2.0 plans to address these issues by moving from a PoW algorithm to a more efficient PoS algorithm, which will eventually allow Ethereum to become carbon neutral and achieve greater speed.

Ethereum 2.0 will also use sharding as a scalability solution, splitting the network into smaller pieces that can process transactions in parallel. Theoretically, this allows Ethereum to process an infinite number of transactions per second, but in practice this is limited by the number of shards created.

Ultimately, the goal of these organizations and projects is to accelerate the Web3 concept.

your victories and defeats
As a premier blockchain infrastructure company, Parity Technologies offers several tools and software to help developers get their blockchains up and running quickly and easily. Parity Substrate is a toolkit for creating custom blockchains from scratch, supporting some of the world’s most popular blockchains such as Polkadot, Kraken, and Chainlink.

On the other hand, Parity Ethereum is the software that runs Ethereum 2.0 clients like Geth and Prysm. Parity’s main contribution to Polkadot is the Substrate framework, which is used to build custom blockchains or parachains on top of Polkadot’s relay chain.