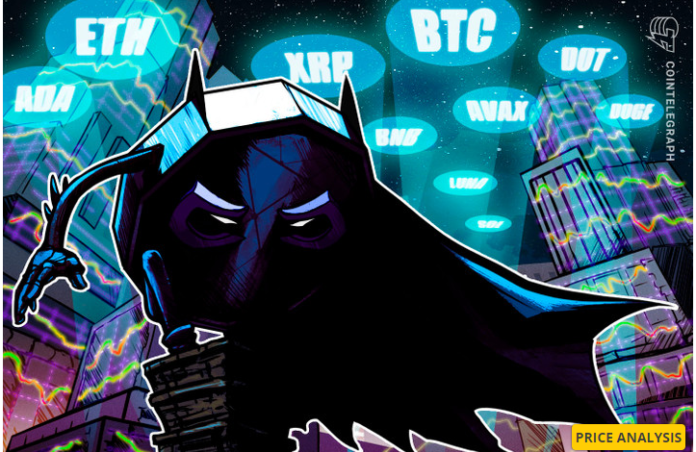 BTC and altcoins have fallen below their lower support levels, signaling that further downside is the most likely near-term outcome.

Bitcoin (BTC) and most major altcoins broke key support levels to start the week on a weak note. Cryptocurrency markets appear to be following US stock markets, which are falling as investors reduce exposure to risky assets due to higher interest rates.

Arthur Hayes, former CEO of derivatives giant BitMEX, said stock markets could crash given the rate hike and the Fed’s cap on asset purchases. If so, Hayes expects crypto markets to continue falling through June of this year, with bitcoin falling to $30,000 and ether (ETH) to $2,500.

Cryptocurrency market daily indicators. Source: Coin360
Ark Invest founder Cathy Wood said in an interview with CNBC that decentralized finance applications are attracting a lot of interest from investors. The legacy banking industry is feeling the heat because not only is it losing loans and business savings to DeFi, but it is also losing talent in the crypto industry.

While the long-term outlook remains positive, could Bitcoin and altcoins continue to weaken in the short-term? Let’s examine the charts of the top 10 cryptocurrencies to find out.

Bitcoin/US Dollar
The bulls have held Bitcoin above the 50-day simple moving average (SMA) ($41,908) for the past few days, but failed to push the price above the 20-day exponential moving average (EMA) ($43,576). This suggests that the bears are selling on the rally.

BTC/USDT daily chart. Source: Trade View
On April 11, selling intensified and the bears pulled the price below the 50-day SMA. Psychologically, there is little support at $40,000, but if it breaks, the BTC/USDT pair could drop to the uplink support line. Bulls are likely to defend this level with all their might.

The falling 20-day EMA and the RSI in the negative territory suggest that the bears are back in the driver’s seat. This negative view will be invalidated in the short-term if the price reverses and breaks the 20-day EMA. The pair could then rally to $45,400.

ETH/USDT
Ether has been trading near the 20-day EMA ($3,198) for the past few days, but a weak rebound from it indicated no aggressive buying by the bulls. This may have encouraged the bears who accelerated selling today.

Alternatively, if the price breaks below the 50-day SMA, selling could accelerate and the pair could drop to $2,800. A break below this support could result in a decline towards the trendline. The bulls are expected to defend this level aggressively.

BNB/USDT daily chart. Source: Trade View
Buyers have been trying to push the price above the 20-day EMA for the past two days but have been unable to sustain the higher levels. This resumed selling and the BNB/USDT pair fell to the 50-day SMA ($400).

A strong rebound from current levels would mean bulls rally on dips. Buyers need to push and hold the price above the 20-day EMA to improve the prospects for a retest of $445.

Conversely, if the price breaks below the 50-day SMA, it would mean that buying has dried up. This could lead the pair to strong support at $350.

SOL/USDT
Solana (SOL) bounced off the upper resistance at $122 on April 8 and fell below the 20-day EMA ($112). The bulls pushed the price back above the 20-day EMA on April 10 but were unable to sustain the higher levels. This suggests that the bears are selling on the rally.

SOL/USDT daily chart. Source: Trade View
The selling intensified on April 11 and the bears dragged the price below the $106 support. The SOL/USDT pair could now drop to the 50-day SMA ($98), which is likely a strong support.