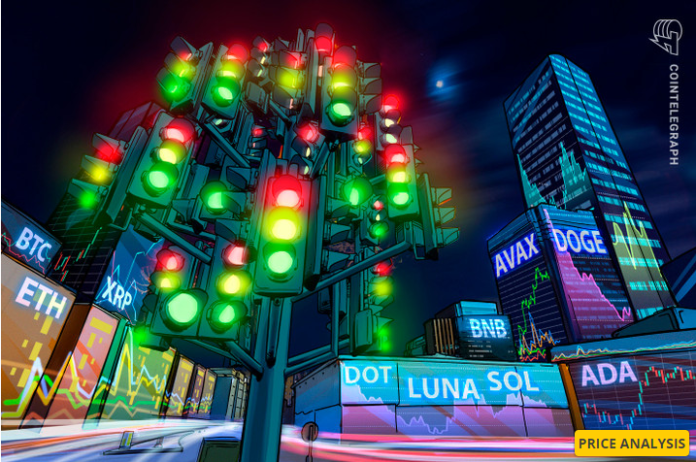 BTC and altcoins are holding their current support levels, but comments from the Federal Reserve this week could be the determining factor for near-term price action.

US stock markets opened on May 2 with a tentative note, but the marginal positive is that cryptocurrency markets, led by Bitcoin (BTC), are holding above their immediate support levels. The price action for the next few days will be determined by the decision of the Federal Open Market Committee (FOMC) on May 4th.

Should the Fed deliver a negative surprise, markets could have a knee-jerk reaction to the decline. On the other hand, if policies meet market expectations, the stock and crypto markets could attempt to rally.

Cryptocurrency market daily indicators. Source: Coin360
If history repeats itself, Bitcoin could see a big move in the month of May. According to data from online analytics platform Coinglass, Bitcoin has twice surged more than 50% in May in the past nine years, once in 2019 and again in 2017.

In comparison, the worst drop was in 2021, when Bitcoin fell over 35%. Given the increased volatility since 2017, traders should be prepared for a possible roller coaster ride.

Can Bitcoin and Altcoins Survive the Recovery? Let’s examine the charts of the top 10 cryptocurrencies to find out.

Bitcoin/US Dollar
Bitcoin bounced off the rising channel support line on May 1, suggesting the bulls will buy any dips to this level. Buyers will now try to push the price above the 20-day exponential moving average (EMA) ($39,824).

BTC/USDT daily chart. Source: Trade View
If they succeed, it means the bears could lose their footing. The positive divergence of the Relative Strength Index (RSI) also suggests that the bearish momentum could be fading.

Conversely, if the price moves back down from the 20-day EMA, it would mean that the bears continue to sell on any small rally. This could improve the prospects for a break below the channel.

ETH/USDT
Ether (ETH) started to rally on May 1st, but the bears are in no mood to lose their lead. The long wick of the May 2 candle suggests that bears will continue to sell near the 20-day EMA ($2,939).

Daily ETH/USDT chart. Source: Trade View
Now the bears will try to sink the price to the uptrend line. This is an important level to watch as a break and close below could pave the way for a potential drop to the next support at $2,450.

Conversely, if the price spikes up from the current level or bounces off the uptrend line, it would indicate that the bulls are attempting to keep the ascending triangle pattern intact. A break and close above the 50-day SMA ($3,059) could open the doors for a possible upside movement towards the 200-day SMA ($3,451).

BNB/USDT daily chart. Source: Trade View
If the price turns down from the current level or the 20-day EMA ($401), it would mean that sentiment remains negative and traders are selling near the upper resistance levels. This could pave the way for a possible decline towards strong support at $350.

This negative view may not be valid in the short-term if the bulls push and sustain the price above the 50-day SMA. If so, the BNB/USDT pair could rally to $431 and then attempt a climb to the 200-day SMA ($469).

SOL/USDT
Solana (SOL) broke below the support line of the rising channel on April 29, reversing the pattern. Selling resumed on April 30 and the price dropped to $82.

SOL/USDT daily chart. Source: Trade View
Buyers attempted to push the price back into the May 1st channel, but the long wick on the daily candle suggests that the bears were selling at higher levels.

If the price fails to return to the channel, SOL/USDT could drop to strong support at $75. This is an important level because