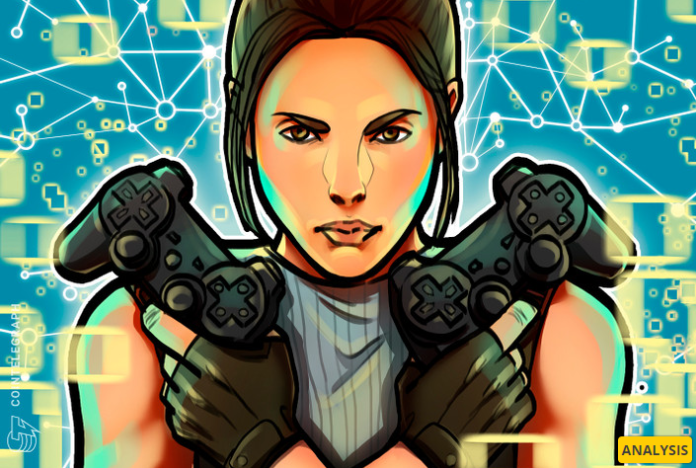 Over the past two years, games using blockchain technology have been actively developing and attracting new players, and the decentralized gaming market – widely referred to as GameFi – is gaining in popularity.

The GameFi industry started in 2013, and since then, the field has been slowly developing, but in 2021, the popularity of decentralized games spread along with the non-fungible tokens (NFT) boom. According to the analytics service DappRadar, the total value of one of the most popular blockchain-based games, Axie Infinity, is over $550 million.

But the GameFi industry has its problems. Many projects are often “launched” regardless of the stage of game development.

And while the direction of Bitcoin (BTC) prices can enhance or weaken the success of GameFi projects, there is not necessarily a direct correlation.

Despite the bear market, the price of many GameFi tokens is growing today due to the NFT component as investors aim to make money from reselling in-game heroes and digital items, rather than focusing on improving the game mechanics.

When choosing a GameFi project, it is worth considering the marketing and technological component: how effective the project is to be promoted, and what benefits the project code gives participants.

However, one must be wary about pie-in-the-sky promises from GameFi token projects, as scams abound in space.

One of GameFi’s biggest scandals came in the fall of 2021 when the cryptocurrency Squid built on the Squid Game program collapsed almost to zero after rising to $2,800.

The token, which was based on the Netflix series Squid Game, debuted in October 2021. It was a six-round crypto game, similar to the killer competition rounds in the series’ plot.

To participate in each round, users need to pay with Squid Codes. The game was scheduled to release in November. Developers will receive 10% of the money raised, and game winners will receive 90%. At the time of the token issuance, users noted that it was impossible to sell the purchased coin.

Moreover, observers began to become suspicious when it was discovered that there was no official connection between the token, Netflix and the authors of the series, so they began to warn users of a possible scam. When such warnings spread, the scammers immediately withdrew all the money. According to several reports, the scammers made $3.38 million in total.

Leaders of the “classic” game industry are highly skeptical of GameFi and tend to avoid the industry altogether, which is a sign users should be careful. Gabe Newell, CEO of Valve – one of the largest video game developers in the United States – commented in February 2022 about his company’s decision to move away from the GameFi segment.

Newell claims that games that use NFT technology and blockchain mechanics are “skinny and shallow” and that NFT creators and projects “are not people you really want to deal with.”

Newell added that there are alleged cases of fraud within the NFT sector, noting that due to the volatile price of the tokens, players do not even understand when and what to buy.

Epic Games CEO Tim Sweeney joined his colleague earlier this month by calling the Fortnite token a scam and stating that the company is preparing for legal action to shut it down. However, the creators of the Fortnite Token responded by describing it as a fan-made project without a specific owner or company behind it. The Fortnite Token debuted in late 2021 and, without a doubt, was trying to tie in with Epic’s massive Battle Royale game.

How do NFTs fit into gaming?
To understand GameFi, NFTs must be recognized and integrated with smart contracts. NFT is an asset whose digital receipt is placed on the blockchain.

The smart contract is linked to the NFT. This sounds serious and professional; Although it’s actually just a small piece of code. And that small piece of code can be anything, including a link to a JPEG file stored on a central server. In fact, the lion’s share of NFTs currently is just that.

A smart contract, which is used to “manipulate” an NFT object between games, is not a multifunctional tool. It does not include a model, texture, description, sound, animation, etc. so that an item or character can be easily transferred from one title to another. Thus, for the integration of two games to work, those games must be built, run, and maintained through a single infrastructure or game engine. These integrations do not currently exist in the gaming industry.

Moreover, an NFT game can only function if it has a large group of users with its own economy, where players can buy and sell in-game items in the form of NFT. However, a lot of traditional games already have such economies.

For example, Eve Only